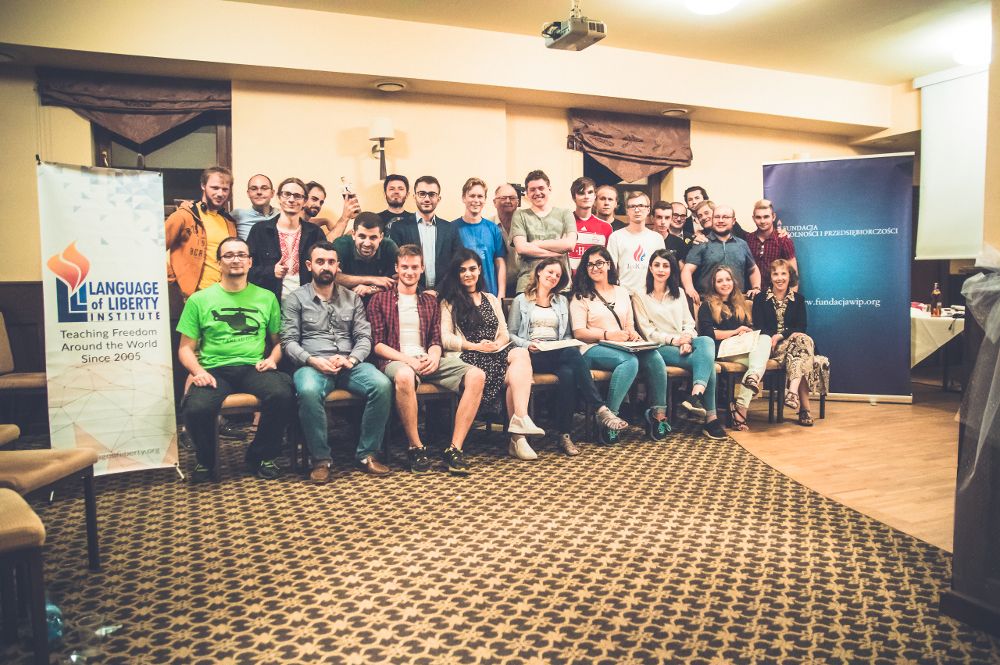 Daniel Issing from European Students for Liberty (ESFL) was responsible for introducing the delegation from Kurdistan (students at the American University there, a local entrepreneur, and a representative from the Kurdish Chamber of Commerce). He attended the Camp and presented the vision and mission of ESFL.

The Camp was opened with a talk by Jaroslav Romanchuk from the Mises Economic Science Research Institute in Minsk, Belarus, via Skype video conferencing. Jaroslav was supposed to be present physically at the Camp but his passport had been lost during the process of applying for a Polish visa in Minsk. Unable to get a new passport in time for the Camp, he attended via Skype and gave us an update on the situation in Belarus.

A second talk via Skype was made by Slobodan Franeta from the Libertarian organisation called Lucha in Montenegro. Slobodan was unable to be with us due to a conflict in schedule but he told us about the situation in Montenegro, especially in the area of education, a topic of much discussion in his country at the moment. Is education a basic human right is the question that is currently a hot topic in Montenegro.

Jan Kuban, President of PAFERE, gave a lecture on the successful transition of Poland from a communist state to a democracy from 1989 to 1992 and his own life before, during and after this period, starting a thriving computer business that is still going strong after nearly 30 years. In his speech Mr. Kuban highlited three main tasks of a true
libertarian in contemporary world:
1. Defeating socialism – system which leads to misery and poverty
2. Active support and popularization of subsidiarity as an idea that
guarantees freedom and economic development
3. Countering decadency by addressing critical challenges and doing needed and
useful work.

Other lectures and presentations concerned Free Market Economics, Judiciary Reform in Poland (a controversial subject currently resulting in tension between Poland and the European Union), Wealth Protection, Agorism, Intellectual Entrepreneurship, and the Forgotten History of the Krakow School of Economics, a movie created by FEF to remember the influence of the Austrian School of Economics in Krakow during and after the Austrian-Hungarian Empire days.

The delegation from Kurdistan gave us both the history of Kurdistan and an update on the current status, barely 3 weeks away from the controversial Independence Referendum to be held on 25 September. Zana, a young entrepreneur from Suleimaniyah, the second largest city in Kurdistan, told us his personal story of starting a web-based business in a place “under siege” from Islamic State and in very difficult circumstances.

Two students from Belarus also gave us a brief update on the economic and political situation in Belarus, highlighting the high inflation rate (second only to Venezuela) an the state of fear that has gripped the country following the disproportionately violent crackdown by the Lukashenka government forces on peaceful protesters in March of this year. Demonstrating merely against unjust and painful taxation regulations (and not demanding the resignation of Lukashenka) was enough to unleash the fury of the State against the protesters and no protest has been held in Belarus since then. Only the IT sector is relatively free in Belarus, simply because the State has not figured out yet how to regulate this industry. Hopefully they never will!

On the final night, we held a debate regarding the question of the potential of agorism to destroy the state. The debate was convincingly won by the pro-agorist side, led by a student from Kurdistan. It was satisfying to note that two 16-year olds from the TDJ English Camp participated in this debate, an experience they will remember for a long time.

The possibility of having a Liberty English Camp in a free and independent Kurdistan excited everyone and we look forward to seeing the result of the referendum.

Following the decision earlier this year by the government in Belarus to allow visa-free entry for up to 5 days to visitors from over 120 countries also increased the possibility of holding a Liberty Camp in Belarus, another exciting prospect. All in all, a wonderful 2 weeks of promoting Liberty in Poland and beyond!